Why CTAs Matter Greatly to Your Conversion Rates

A call to action (CTA) on your website is more than a carefully chosen phrase. It’s also a mechanism for encouraging your visitors to convert. Here’s a closer look at why and how the kinds of CTAs you choose could impact your business outcomes.

Writing a compelling CTA means putting yourself in the position of your target visitors and understanding what words would most likely cause a favorable response and which ones might make them disinterested or even annoyed.

One company ran an experiment to see which CTA phrase made people most interested in ordering sample textbooks. The first said “sign in and order a sample” and the second read “request a free copy.” The results indicated that the second phrase caused a more than 20% increase in people asking for samples.

The team who ran the research drew several conclusions about the results. First, they believed using the phrase “sign in” created friction by making people think they needed to register accounts first. Additionally, the marketing team thought the word “order” was more likely to make people anticipate they were getting set to purchase something than the word “request” did.

There’s also the common assumption that people love getting stuff for free. The second CTA phrasing explicitly mentioned that they would, but the first one didn’t include the complimentary element.

As this study shows, only a few seemingly minor word changes can make significant differences in how your customers feel and react. If your current CTAs aren’t getting the conversions you want and expect, think about tweaking them and measuring whether they cause improvements.

CTAs can also work well for conveying to customers that they must act quickly to avoid missing out on special perks. If people feel a sense of urgency from what they see, they’ll be more likely to take action immediately rather than putting it off. That immediacy is a good thing for your conversion rates.

The Handmade Soap Company uses a CTA to entice people to purchase their bundled hand wash and lotion sets. The company features a different one each month. People who buy them together can save 10% compared to the cost of purchasing the items separately.

Notice how the call to action button mentions the discount people get while encouraging them to shop now. That way, consumers know precisely what’s in it for them if they purchase right away rather than after the offer ends.

It’s also a good decision to include a few product benefits in the accompanying description. Adding images of the bundled products, complete with their attractive and distinctive labels, also gets people more excited to buy.

People frequently use vague link text for their CTAs, but that doesn’t mean it’s a good idea. Using the word “submit” is a good example of what not to do. It’s better to make the CTA button reflect what will happen once a person sends their information. You might change it to read “subscribe,” “vote” or “get discount code.”

The major exception to this best practice is a CTA link that reads “Click Here.” It’s not specific but could still help you increase conversion rates, as long as you add context around it to confirm what people get by clicking.

CTAs can also help people know what they’ll find after clicking a link. Saying “Shop our newest summer dresses” is more descriptive than “Browse dresses.” Maybe a person would rather see the clearance dresses than the ones a store just received. Using the appropriate link text for a CTA steers them in the right direction.

Being descriptive with the content surrounding your link text can also encourage people to envision the possibilities. Imagine an outdoor furniture store with a CTA that says, “Shop sectionals”  and features an accompanying image of a household entertaining guests while using their newly bought pieces. A well-worded CTA can show people that you have everything they need to make their lives easier or more enjoyable, even if they didn’t narrow down what to buy yet.

A CTA Can Support Visitors’ Objectives

A strong CTA accounts for the numerous reasons that may cause a person to land on a website and learn more about the associated products or services. One way to do that is to design different CTAs for particular user groups. One study found that such an approach made the targeted versions get viewed 42% more than the generic CTAs.

However, you don’t necessarily have to create customized CTAs for different user groups as long as you have a clear and in-depth understanding of the goals your site visitors likely have. What factors caused them to perform a search query and eventually land on your site? 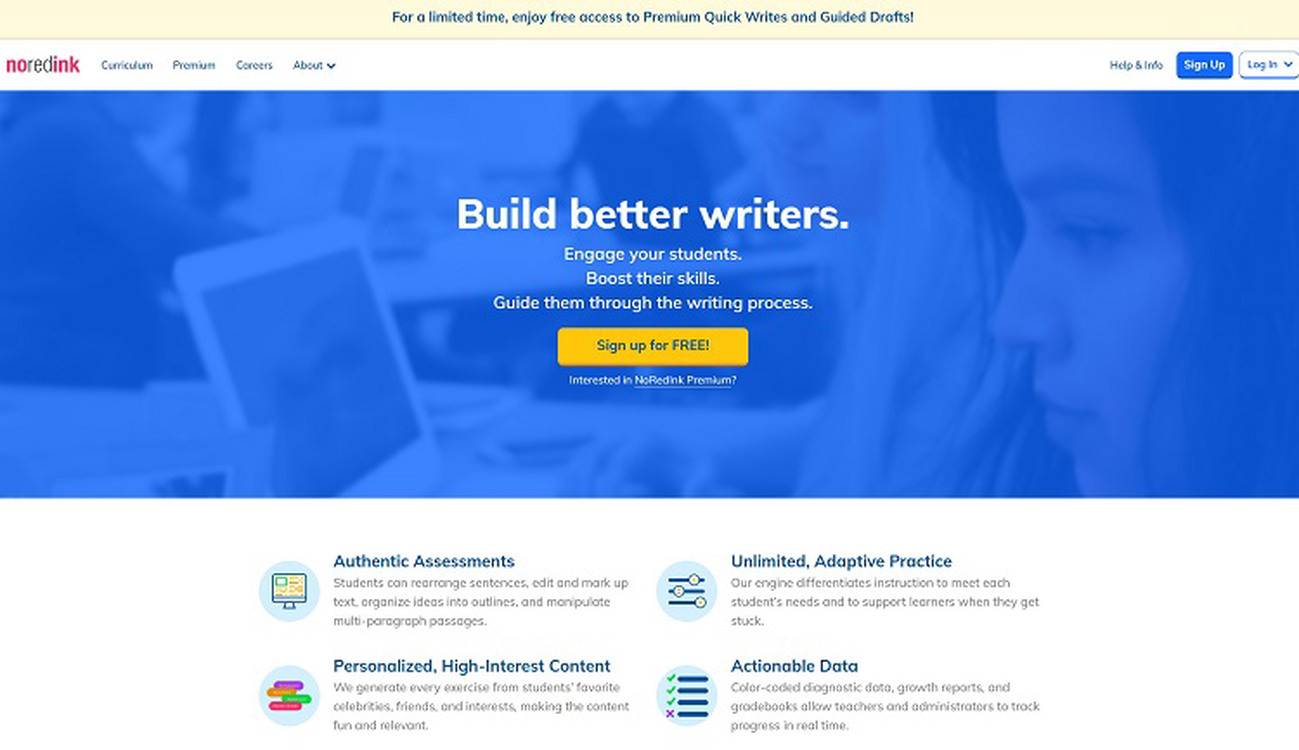 The team at NoRedInk understands user needs well. The company caters to writing teachers that want to improve how their students learn. The color of the site’s call-to-action button stands out against the blue background, making it easily visible. The text above the button also speaks to some of the primary outcomes educators want when using teaching tools or platforms.

Notice the word “free” in capital letters, too. That was a wise choice, especially since teachers often have limited budgets. They’d understandably like the idea of being able to sign up for something and check out a product before committing to it.

The short feature descriptions below the CTA also reflect numerous requirements and wants teachers typically have regarding the products they use. Then, it’s easier for people to know what they’re getting by signing up to try the company’s offerings.

Your CTA Can Ease Pain Points

A CTA also gives you an excellent opportunity to boost conversion rates by directly speaking to the concerns, problems or hesitations your customers have. Position your company as able to help with those matters.

Dover Saddlery does that by making CTAs that appeal to frazzled parents preparing to send their children to summer horse camps. The company’s “click here” example also specifies what people get by engaging with the link. Using the same color for the pen, checklist items and parts of the site banner help give a cohesive look that makes the CTAs and the surrounding content visually appealing.

Check out how this CTA example also gives people options by appealing to both in-store shopping and online purchases. That was a smart decision on behalf of this company’s marketing team, especially given the assortment of things a child might need to bring to camp.

If they just need a second pair of their current boots that are now too worn to use, that’s probably an easy online purchase. However, a shopper might feel more comfortable buying something like a helmet in a store instead.

As these examples show, a call to action can be a powerful conversion driver. However, everything from the color to the CTA text could make those parts of your site more or less noticeable. Consider using the examples here as inspiration as you examine your CTAs to see what’s working well and where you might improve.